HOW I BECAME A REAL BUSINESS OWNER

AND NOW I LIVE HERE

I left the corporate world to start a small business in 2005, things were harrowing there for quite a while, but eventually I got the hang of being self employed.  Around 2011, I started to claim the mantle “entrepreneur” as my business was growing and this business was a germ of an idea – but I only recently became a “REAL” business owner.

A bit of background, as well as True Entrepreneur, I own a large and successful service business called Team Bonding.  We are the leading brand in the team building industry in Australia, our “thing” is running fun events for corporate teams – mostly outdoors – taking advantage of our great weather. In 2014 we ran over 300 events for most of Australia’s leading companies and are on track for 350+ in 2015.

I started this post last year for my friends in the Superfast Business forum.  It is about HOW I put Team Bonding under management and stepped away from the day to day.  You’ll see there is a postscript, because guess what?  Things don’t always go according to plan.

I’m writing this from my country retreat where I have gone into a creative cave for the week, I’m surrounded by flip chart papers covered in frameworks and post it notes creating my new business True Entrepreneur.   I’m in heaven.

Back at home my business has made $12,300 in new sales this week, and I haven’t spoken to a single customer.

Team Bonding is now under management, and this weekend I was called“a REAL business owner “(at last).

Vision:  A few years back one January I sat down with myself to ask myself where I was in life and where I wanted to go.  I created a vision board and started following the “Desire Map” principles (Danielle LaPorte), building a life based around feeling good.  The elephant in the room was revealed quickly, my desired life did not include Team Bonding, although I acknowledged its importance and it’s success.  If business is like marriage, I was with Mr Wrong.

Decision:  I decided I would sell Team Bonding – (then one fifth the revenue it is now).  I spoke to a range of people and discovered

a) that people won’t pay much for a business like this
b) no one would buy it unless there was a system in place to run it.

I didn’t want to hear either of these things and I had some tears. Clearly, the sale was going to take a lot longer than I wanted it to and I considered just closing the doors.

Simultaneously visions of my future business were emerging, so when I was down and out with Team Bonding I found great joy in “playing” with ideas for my new business.

Truth telling:  I had to come to grips with the numbers in the business, which for me was tough.  I had a pathological hatred of MYOB, so I created a spread sheet with fancy V lookup tables which I taught myself from you tube. It had every event going back to the start of the business in a row.  Columns included revenue, COGS and expenses.  I also found a great book keeper and a new accounting team and got the accounts super clean so I could answer any financial question, this was a big investment as there was lots of recoding.

After all this it was clear that the business wasn’t making enough money to get the price I wanted. I knew that the potential was there, but buyers don’t pay for potential, so the sale had to go on hold while I grew the business.

Sales growth:  I had one product (Amazing Race) which trounced everything, so I created a second website based around just that product and it was an instant 40% boost to the business.   Now I was working way too hard (in truth I’ve always worked too hard on this business) but money was coming in at last.

Delegation:  In June 2011, I was in San Diego sipping wine in a swanky bar and my phone started to beep incessantly.  Then – much to the bemusement of my drink companions (acquaintances from the conference) – I started to cry.  It was participants texting me an answer from their race – the event was running in Sydney without me! I had delegated!  Cue happy tears….. the business grew faster after that because I could take double bookings on busy days.

Formula:  I had put years into perfecting 20 event products, however from the early days, one (Amazing Race) was a “silver bullet”. It was easy to sell because it ticked all the client’s boxes. I had somehow cracked a formula that worked independently of geography, which personnel delivered it, team size and even the type of people on the event.  Teams enjoyed it virtually every time.   To test my formula I expanded to Melbourne and trained a team there.  The business added another 20% – but even better was that the event worked just as well in Melbourne as Sydney.  We have since added Brisbane too.

Systems:  I am the least administratively talented person in the world, so when I started to need some admin help in the office, I was pretty haphazard and not easy to work for.   I didn’t let anyone find their feet as I kept jumping back in and trying to improve things on the run.  When a part time staff member moved away I decided on a full time VA. Predictably this was a disaster, but in a good way, it forced me to work really hard on our systems and procedures.

I got a better VA, then another, then moved everything to a fantastic help desk (thank you HelpScout).  I’ve also created systems for every event and cross trained a lot of team members to give ourselves plenty of back up.  I actually now feel I can speak about this because I had no natural talent for systems (I am creative you know….) but now I have good systems in my business, all by trial and error.

Scrutiny:  The best thing about trying to sell the business was it drove me to look in every dark corner and shine a light there.  I did my best to bring the websites up to scratch with blogs and fresh designs.  I added more marketing channels, got some help with my adwords (yet again, first person was a disaster, second time around is brilliant) and improved my repeat business ratio as I knew those would be important to a buyer.

To sell the business, I eschewed a broker (I didn’t meet any smart ones, sorry brokers) and tried to sell the business myself using a “product launch formula”.  Though not ultimately successful, I had 3 “near” buyers and the process itself was incredibly valuable.  It is like keeping your home ready for inspection at all times, and since current results are often a result of hard work done years before my numbers are now something to be really proud of.

Manager:  Earlier in the year a number of people I respect floated the idea of NOT SELLING.  They felt the business would likely be more valuable to a buyer with a manager in place, as my role seemed so integral to sales and service.  Plus the business looks set to add another 40% of revenue (and even more to the bottom line) in 2014.  An insightful mentor, James Schramko, challenged me to get the whole business systematized so well that I would actually want to keep it.

So as much as I would have preferred to sell, I grit my teeth for one more assault up the mountain and recruited and trained a manager.  It has taken 6 weeks, including moving all the equipment to her home office and tripling my efforts on creating simple systems.  She is working “solo” this week, and loves the job.  She does need my support and some questions will bounce back, but that is OK.

In the meantime Team Bonding is gangbusters, I may need to get my manager more help!  I am still working Mondays and will also work the blockbuster events (we have 500 people in 3 days next week), but at last, I have freed up 3 days a week to pursue True Entrepreneur.

Ok, so my first manager didn’t work out after all.  It was dreadfully hard on us both, I hated that difficult conversation about parting ways. In reality my gut had known early on that there were some issues, but I wanted to persist.

In hindsight, the fault was mostly mine, I hadn’t let go (I only thought I had) and I hadn’t acknowledged that this was a full time job, not something someone could dip in and out of.

My sister said it best; “you need someone to run it for you”.  That gave me the vision of being another step back from the business, an “invisible” entrepreneur and I knew I had to invest in a really capable general manager.

I am so pleased to say I moved the business to a new location in November 2014, smashed out 70 events in 3 weeks of December 2014 (as well as recruiting and training our new GM in the midst of the chaos).  We finalized her training in January and February 2015.  She loves the job and is doing really, really well.  The level of conversions (enquiries to sales) is virtually the same as what I can achieve and a great indicator at how well she is going. 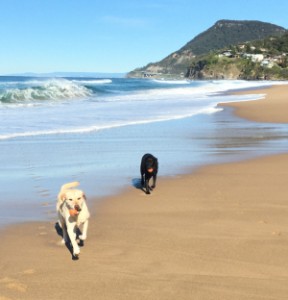 My previous manager is still on the team, we have found her a role that suits us all much better, plus she is back up on a key function.

I still do business development, in June I managed a website redesign, rebuild and migration. I’ve also created 2 new products, run the very large events and am first back up when things go wrong.  (I’d like to get my GM more help now).

I’ve also moved to an awesome part of the world and live on a beach now (see my dogs on our beach at left).

This has created more joyful distance between me and Team Bonding…. and I have more time for personal projects.

Mostly of course, I have time for this, my true passion, bringing True Entrepreneur to its audience.

Hi, I’m Cate Richards – I show freedom seeking business starters (like you) how to find your way into a crowded market and get your "ducks in a row".

My specialty is strategy – skillfully guiding you through the maze of decisions and getting you set up for success. As a newish entrepreneur, you are being bombarded with tactics and advice, which is crazy making.

Here we start simple by understanding your Sweet Spot and defining a positioning. I'll help you design a bespoke strategy from your zone of confidence. Without this certainty, you'll drown in overwhelm.

I draw on 20 years experience as a business strategist for the big end of town PLUS another 10 years in the entrepreneurial salt mines.

I built a big business that didn’t make me happy, so I left it in capable hands and am building this one straight from my heart.

If you don't particularly need another freebie, but would like to stay in touch with my new content, please subscribe.  I promise, you won't be bombarded!

Are you a true Entrepreneur?