the story of social life

And the day came when the risk to remain tight in a bud was more painful than the risk it took to blossom. – Anais Nin

Creatively stifled in an under resourced corporate role

Buffeted by the burning politics of yet another restructure

I awoke one morning with a scrap of idea, and that idea pursued me on my runs, in the shower and on my way to work.  Every day the idea was bigger, stronger and more intoxicating.

The lure was the blank sheet of paper, the challenge and joy of creating something from nothing. I had spent nearly 20 years helping huge companies design their strategies and build their brands.  I loved my work (I did not love all of what came with it) but I adored strategic marketing, from my very first job in market research I had found my calling.

Problem solving, patterns, understanding what lies beneath, turning data into stories, bringing feedback to life – all of this came naturally to me.  I was a success (not to boast, but to set the scene), I worked on great blue chip clients with clever motivated people.  And I did that for a long time, in quite a few different places.

And one day I just didn’t want to do it anymore.

With that great gift of hindsight I am amazed at the risk I took and the courage I showed in “going for it”.  It truly sounds ridiculous now, but I never contemplated disaster.  It was so all consuming to launch this scrap of an idea into a fully formed business, that I never really got past the opening night party in my thinking.

I had never failed at anything, so I didn’t know what to be afraid of.  Ohhhh, how much I was about to experience.

Social Life was a club for professional single people in Sydney’s north.
My idea was to run night courses and events to allow people to meet over a shared activity and develop a natural friendship. 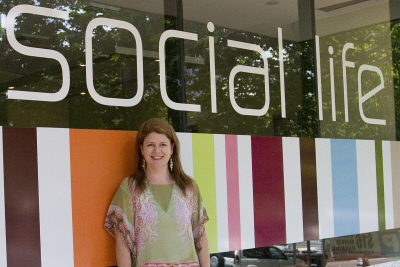 I was a branding specialist so all the following were nailed; my brand, my imagery, my ideal client description and the insights I had about their struggles, our semi premium positioning and sparkling enticing copy.

I employed the perfect person to help me with the event management and admin side of the business and I found an amazing premises (the rent was daunting and the lease was quite long, but hey, EVERYONE said I had a great idea and it had to have its own fantastic inviting place right? There it is in the photo)  I roped in my talented mother and brother to help me fit out and furnish my club.  I redeemed a good part of the equity from my paid off home and built this incredible place.

The business savvy amongst you are already thinking “uh oh” OVERHEAD CITY.

I should also tell you when this was, mid 2005.  Internet dating was in its infancy, but it was attracting a lot of attention as the modern way to date.  I absolutely hated the idea of it (I have still never registered for internet dating) and held fast to my belief that the easiest path to a relationship was via a friendship group.

My first facebook friend request landed in my inbox a year later, in mid 2006.  What is ubiquitous today as a marketing tool was not available then.  And that still hurts a bit.

To this day the words of a financially astute friend ring in my ear. The most simple of questions; “how are you going to get the people?”.  And I sputtered a bit and said, “well won’t they just hear about us and want to be a part of it?

So I launched, with a lavish party and opened the doors to our fantastic space with course rooms, a wonderful common area, an outdoor terrace a newly built kitchen and an outdoor terrace.  I invited everyone who came to the party to join us.

In the next 10 days another 5 wandered in.

By day 11 I knew I was in terrible trouble.

I believed there’d be 10x that many people before the first courses launched.

So began my year of living desperately.

Marketing, the thing I was supposed to know and understand was failing. My people were a small slice of a mass population.  They didn’t hang out any particular place, they didn’t read any particular publication, they weren’t searching for the solution I had. They were difficult and costly to find.

2 things helped in those early days, the first was an article in a weekly free magazine that appeared the week after we launched.  I had a few calls, explained the concept and some people joined.  So I knew PR would be great if I could get it.

The second idea came from an unexpected source, my landlord’s daughter (who I disliked on a personal level, so thank goodness I listened).  She said, “what about an open house, so people can see the place and meet you and meet other people?”

I did that every Thursday night for the next year.  No matter how bad things were, I smiled and extended my hand to everyone who came through my door, learned names, showed them around, introduced them and prayed they would join.  (Many did, bless them, but just never anywhere near enough)

Some good things happened of course.  I made a lot of wonderful friends, many of whom I still have.  They were exactly the type of people I had imagined joining; smart, funny, attractive and enthusiastic people.  Some people did indeed meet partners and eventually I was an honoured guest at some beautiful weddings.  There are even Social Life babies, 2 gorgeous, thriving happy little girls that I see pop up in my facebook feed.

My concept worked really well, our courses were great.  If I ever write a fiction novel it will be about my Tuesday poker group.  I had a course called Think Tank that required me to find a guest speaker with a “discussable” topic each week, and many of those were awesome.

Members did wine tasting, pop psychology, sailing, tennis, self development, philosophy, walks, bands and epic parties.  I created a course called Social Magnetism, to help people find the best in themselves and make friends. This was our bestseller and I remain very proud of it, because I know lives were changed.

I learned to accept help, and many, many offered. My brother’s dear partner came every Thursday night to help with the open house (have I ever thanked her enough?).  A friend from work accompanied me to singles parties and approached men to tell them about Social Life.   My mother, who was an incredible support every step of the way, commandeered many of her friends to tramp around their neighbourhoods putting our postcards in letterboxes of unit blocks. 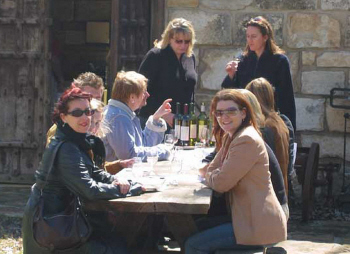 One member of the club redid my website and was behind the only good decision I made in a year – to build a different website to market the venue to corporate groups.  Another was a keen photographer and took head shots for me.  Another introduced me to the nascent google adwords, which finally got the phone ringing.  Many gave up their time to be interviewed for publicity and even participated cheerfully for a TV shoot by the Today Show.

And of course I had Mel, my full time employee, who was beyond incredible.  There are no words to describe her efforts to support me and the business.  Occasionally when we catch up over yum cha, conversation gravitates to our top ten worst moments, we just laugh and marvel at what we endured.

But it was so damn hard.  Week after week the business was costing $3,000 more than it was making.  The day my atm card declined I felt it like an electric shock. That was it, the entire value of my home exhausted.  I had to start borrowing money from family members.  It was hard, humbling and horrible, to feel like I had to beg.  (I had to beg).

And oh, the false hope.  Maybe that is the most shameful of all, thinking someone could wave a wand and get me out of this trouble.

I battled on for 11 months or so, luckily we were able to develop a second business that started to pay the rent after around 6 months, but the high cost of running the business and the early losses were insurmountable.

Your mind can be a powerful protector, especially when you are dealing with unprecedented catastrophe.  It took a while for the gravity of my financial situation to sink in, but at some point I realized I would have to sell my home to pay back my family and put myself back to zero.

It was a GP who said to me “these are real problems you have, not the sort of problems that medication or talking will solve, you need to find a way out of this”.

The personal cost was extreme, in one 8 week period in early to mid 2006 I seriously injured my back, had to prepare my paid off home to be sold, my beloved grandmother passed away and I couldn’t support my mother in her grief.  Then my father had a serious heart attack that lesser men would not have survived and spent time in intensive care. (I had to cancel an event of course, to go there).  Battling depression and chronic insomnia, I sold and then said goodbye to my much loved apartment, leaving the keys on the kitchen bench and shutting the door on 10 years work.

My 70 hour work weeks continued.  The not-really-real smiles continued. When you are going through hell, all you can do is keep going.

I moved to an amazing house in a new and lovely area, which was lent to me by some dear friends in an act of incredible generosity.  After all the upheaval, it was only 10 days later that I knew in my bones that I could not go on with Social Life.  I was physically, emotionally and financially exhausted.  I had persisted with my “dream” beyond all measure.  I wasn’t strong enough. I could not make it work.

I held one last party, a winter ball.  I had attended the funeral of a family friend earlier that same day with my still fragile parents.  I stood up and told 90 people who had supported Social Life that I couldn’t go on.  I gave out awards to the people who had given the most to the club.   It was awful, but they were amazing.  They even collected money for me to spend on a holiday.  Many of them still catch up to this day and 10 years down the track, I have such enduring love for these people.

Then it was over.  There was a huge amount relief and I missed it for not one second.  It took me a long time to recover and I was hit financially a second time in the GFC.  In those last months of 2005 I started a new business, Team Bonding, which rolls on today.  From the ashes.

Lessons … so many.  The most lasting of which show up in my character; empathy, humility, integrity, gratitude, strength and facing up to s***.